From the Founder's Diary ...

While teaching in Venice, in 1993, I discovered the vineyard garden of San Francesco della Vigna; thus began a systematic

relationship with grapes that has engaged me and my colleagues every year – as relentless as the seasons – to discover the environments, along with the students, of the middle school “P.F. 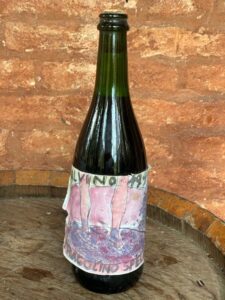 Participation was then extended to other schools and the harvest locations have diversified over the years: from San Francesco della Vigna to Sant’Elena, to the former Veneziana Gas property to Sant’Erasmo and finally, to the Scarpa Volo area in Mazzorbo. In 2007 we were the last to harvest Scarpa Volo before the Bisol company won the tender launched by the Municipality of Venice and promoted the production of Dorona.

Our work was not limited to the grape harvest but continued to the production of wine. I remember the emotion of the students pressing the grapes with their feet in the cloister of Sant’ Isepo and the smell of the fermenting must in the air making the school seem like something different.

The didactic aim was to cultivate knowledge of the vineyards using the colours, smells, and flavours of the seasons and the earth; giving the students the role of protagonists in a complex activity involving grape harvesting, crushing and bottling of that liquid food called Calvino, of course.

Outside the school, the experience continues and ‘Laguna nel bicchiere, le vigne ritrovate’ (Lagoon in a Glass, the Rediscovered Vineyards) is born

In retirement, I risked suffering from withdrawal symptoms. Fortunately, curiosity, energy and collaboration had developed during this adventure And so, with restauranteurs, Mauro Lorenzon, Cesare Benelli and others, we developed the idea of promoting the tasting of lagoon wines on the Feast of San Giovanni alla Bragora (the summer solstice). This event, that has been repeated since 2008, has been christened ‘Laguna nel bicchiere, le vigne ritrovate’.

At the time, not having our own means of production, we went in search of the wines of the past and in addition to San Francesco and Sant’Elena we discovered four other wine producing convents: San Michele in isola (The Order of Friars Minor), Carmelitani Scalzi alla stazione (The Discalced (barefoot) Carmelite Monks near Santa Lucia Station ), Clarisse on Giudecca (Sisters of Clarisse on Guidecca Island), Carmelitane Scalze in Cannaregio (The Discalced (barefoot) Carmelite Sisters in Cannaregio).
During our research we met Vio Gastone and his wife Dariella, owners of the oldest dorona vineyards in Sant’Erasmo and producers of excellent saline wine, with whom we have never stopped collaborating and enjoying their generous hospitality. With all these connections we have promoted the 2008-2009 events at the Bragora supported by the Istituzione Parco della laguna (Lagoon Park Institution) and Slow Food.

Looking for the Casanova Salso wine at Hotel Cipriani in the zone of Zitelle on Giudecca we discovered the first abandoned vineyards. Immediately afterwards the Franciscans of San Michele informed us that they were about to leave the convent, abandoning the vegetable garden, vineyards and cellar.

Here was the opportunity that defined our purpose: to recover the vineyards, safeguard a tradition and protect an original and almost unknown landscape and to reveal the hidden city-countryside relationship of Venice. It was necessary to transform ourselves into a non-profit cultural association, with a statute, tax code and registration in the municipal register. This has allowed us to be recognized by various public and private organisations who, contacted directly and through extensive correspondence, have allowed us to manage the vineyard at Zitelle (I.R.E and Cipriani) and the vineyard and the cellar in San Michele (Veritas S.p.A and the Municipality of Venice).

Now we had the vineyards and the cellar of the Camaldolese, but there was a lack of equipment, volunteers and above all the experts to guide our activities.

This is where the fourth musketeer appears, the organic winemaker, Gian Antonio Posocco from Cappella Maggiore; a winemaker and a promoter of natural wines who was swallowed up as the future ‘deus ex machina’ for the winery. He was followed two years later by Gigi da Fregona known as ‘Miracol’, a whimsical winemaker, acrobat, juggler, balancer, fire eater, poet and, above all emeritus taster and then by Simone Salin from Mestre who, with his experience as a cellarman and restauranteur, completed the team working in the vineyards and in the cellar.